Introducing my first comic drawn on my graphics tablet!  It’s taken a while to get finished, due to having to restart it a couple of times because A) my cartoon style sucked and B) I recently upgraded to the full version of the software I was trialing and learned that there is such a thing as LAYERS which made drawing this kinda thing a billion times easier.

To distinguish English dialogue from Japanese, I wrote what would’ve been said in Japanese in the slightly thicker ink pen style.

The older folk make enthusiastic conversation partners, but the intensity of topics tends to escalate rather quickly…

I began volunteering as the vice-president for the charity Everest of Apples (run by myself and two other Aomori ALTs) in June, and last week I finally got to host my first event.  Previously I had only contributed to a large-scale event, which was really an AJET event to welcome this year’s new JETs to Aomori.  We set up a bar and made cocktails in exchange for donations at the party, which was fun but meant I had to spend a lot of time making people drinks instead of getting to know the new JETs.

This time my friend Alyssa, who is the president of E of A, and I decided to have a language exchange fundraiser in two separate locations in Aomori.  People paid 1,000 yen entry (500 yen donation plus 500 drink ticket so the kind guys who own the bar get some money) and spent the first hour talking in English, the second hour in Japanese, and the half-time interval tackling a quiz I made.  We wanted to make it like an East vs. West kinda fundraising competition to see who could raise the most money.  (Hirosaki won with about 31,000 yen in donations!)

I hosted the event in Hirosaki on the west side, and Alyssa hosted one in Hachinohe on the east side.  I was anxious that not many people would show up as we only had 20 people RSVP on Facebook, but we had a grand total of 52 attendees!  I was intrigued to find that a lot of the Japanese people who came found the event by searching for it on the internet, as well as one British guy living in Nagasaki who was travelling solo around Aomori.  Some people saw us standing outside the bar having fun and decided to join right then.  I had an interesting conversation with a Japanese professor who found the event online; he had done fundraising in Uganda and was keen to stay in touch.  I didn’t realise the internet had the power to passively advertise such a small event!

Even though I was a little flustered at the beginning, as I didn’t expect so many people to ACTUALLY arrive at the start time, I ended up really enjoying myself and having zero cock-ups.  Hurray!

Our next event is even bigger – the Halloween party in Aomori City.  It’ll be me, Alyssa and our treasurer Kyle working together so I’m looking forward to partying in my spooky vampire threads.

Taking from the rich…

Chatting outside the bar

I have no idea 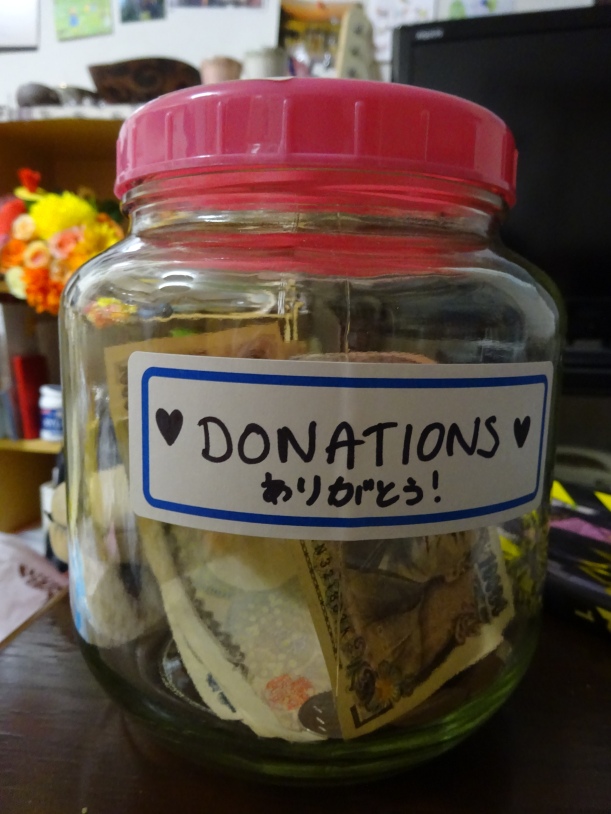