The stress of leaving is over and I have started my solo travels of Japan!  My last few days in Aomori were spent getting burnt and having fun on the beach, furiously cleaning and gutting my apartment, meeting the new guy taking over my job and helping him sort out his phone and bank account, trying to sort my own bank account out to send money home, chilling at Lauren’s and trying to savour the time I had left with my friends.

I went to Goshogawara on Saturday to see Tachineputa, and couldn’t really believe it had been two years exactly since I arrived in Aomori and got the train by myself to see it.  The highlight was seeing my favourite student, who graduated to senior high school in April, dancing with his classmates in the parade.  We were on the same train from Goshogawara the day before, and he told me he was going to be in it, and I said I’d keep a look out for him!  During the parade we saw each other and waved like mad, and he kept waving whenever he turned around, then danced away with a huge smile on his face.  Another highlight was seeing Lauren and some other ALTs who were taking part, playing the hand cymbals and getting the crowd hyped up. 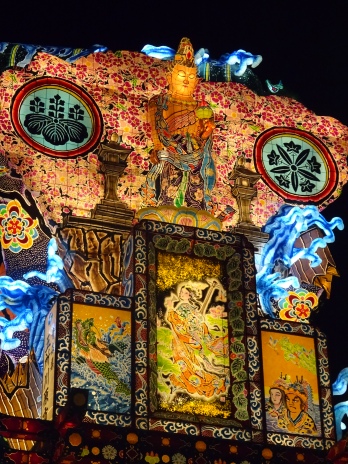 My last night in Aomori was spent watching the biggest most spectacular fireworks I’ve ever seen, as in to the point where the fireworks turn into multi-coloured hearts.  I got ready with Yuka at her place, and we wore our yukatas which were maybe a bit louder than most designs, but we thought fireworks were an appropriate occasion to look flashy!

Yuka took me to Shin-Aomori station the next morning, and it was only when we were saying goodbye that I started crying.  I thought I’d cry when I said goodbyes to my other friends, but having them so spread out made it feel less final, until I was actually leaving.  I got on the train all teary-eyed, but then a nice-looking Japanese couple sat in front of me and smiled when we made eye contact.  A few minutes later they turned around and struck up a conversation and it turned out they were visiting from Tokyo to see Nebuta.  The man was from Kanazawa and recommended me his favourite take-out sushi place, and we exchanged emails.  I felt a bit better then.

This is the rough route I’m doing over twelve days with my rail pass until I go to Summer Sonic in Tokyo, then fly home on the 22nd. (Kanazawa – Kobe – Takamatsu – Okayama – Hiroshima – Hamamatsu – Kawasaki – Chiba)

I’m in my hostel in Kanazawa now, and the (foreign!) guy sitting opposite me is eating cup ramen, but kind of quietly lapping the noodles up with his tongue rather than slurping them up in one go and it’s driving me nuts.  Have I turned Japanese?