After the bunkasai, I was invited to an enkai to celebrate the end of all the hard work put in to organising the festival.  An enkai is essentially a drinking party with food.  Normally the food is not chosen from a menu, and it’s fun to see what kind of things will be served up next.  Usually the main dish is cooked at the table, so we can all help ourselves.

Earlier the teachers told me the name of the restaurant we were going to, which was in the city, and I assumed I’d be able to find it using the map on my phone.  I followed the directions and ended up in some shady part of town behind the train station.  I was about to give up when a nice-looking restaurant came into view, but when I went in there was no reservation under my school name…

“What is the name of the restaurant you’re looking for?” the owner asked me.

“Oh… this is Hana *something something*…”

I told her I got the feeling I was in the wrong place when I saw how nice it was inside!  She laughed and called a taxi for me, chatting with me the whole time before it arrived.  I still had ten minutes before I was supposed to be at the actual restaurant, so when I arrived and the teachers asked me if I found it okay, of course I told them I had no problem…

I had such a fun evening, not only because I could actually drink alcohol this time instead of driving home, but because I got to know one of the other teachers whom I hadn’t really spoken to before.   I was a bit worried when he sat next to me, because even though he’s friendly, he’s REALLY quiet, but after a couple of minutes I asked him my favourite question:  What music do you like?

I like a lot of different music so this question always gets the conversation going, unless my partner says they’re not interested in it, in which case I am immediately suspicious of them.  However this teacher, Mr. O, said he liked “older music”.  Off to a good start! I thought, and encouraged him to go into more detail.  He said he liked artists like the Rolling Stones, Neil Young, Radiohead and Deep Purple.  On top of that, he was a die-hard metal fan.  I’m probably not as much of a metal fan as he is, but I like nothing more than finding out I share similar music taste with another person, especially if they haven’t heard of any of my favourite bands, because I get to make them mixtapes!!  Then we can fangirl/fanboy over the same stuff.  He said I was the first girl he’d spoken to that liked that kind of music, which I was really surprised about.  But then again when idol groups and bands like One Direction dominate Japanese girls’ music preferences, maybe it’s not that surprising from his perspective.  In my opinion Japanese music is very… bland.  And even Mr. O said so (but I didn’t mention it until he did!!).

I pretty much only talked to him and my JTE all evening, and even she was surprised that someone as gentle as him was such a metalhead.  I mentioned that they always seemed to be the ones that sat in the corner being quiet at my school.  When I went to work on Tuesday, he lent me some CDs he’d picked up from his parents’ house that weekend for me.  They were 80s/90s power-metal bands he’d listened to at school, including Gamma Ray, Impelliterri and Fair Warning; not the kind of metal I’m really into, but I enjoyed imagining being a 15-year old Japanese high-schooler listening to these foreign artists for the first time.  I gave him a CD I’d made in return, which included all my own high school favourites like Muse, Queens of the Stone Age and the Pixies.  After lunch he told me he was half-way through listening to it, and that he was really liking it so far. 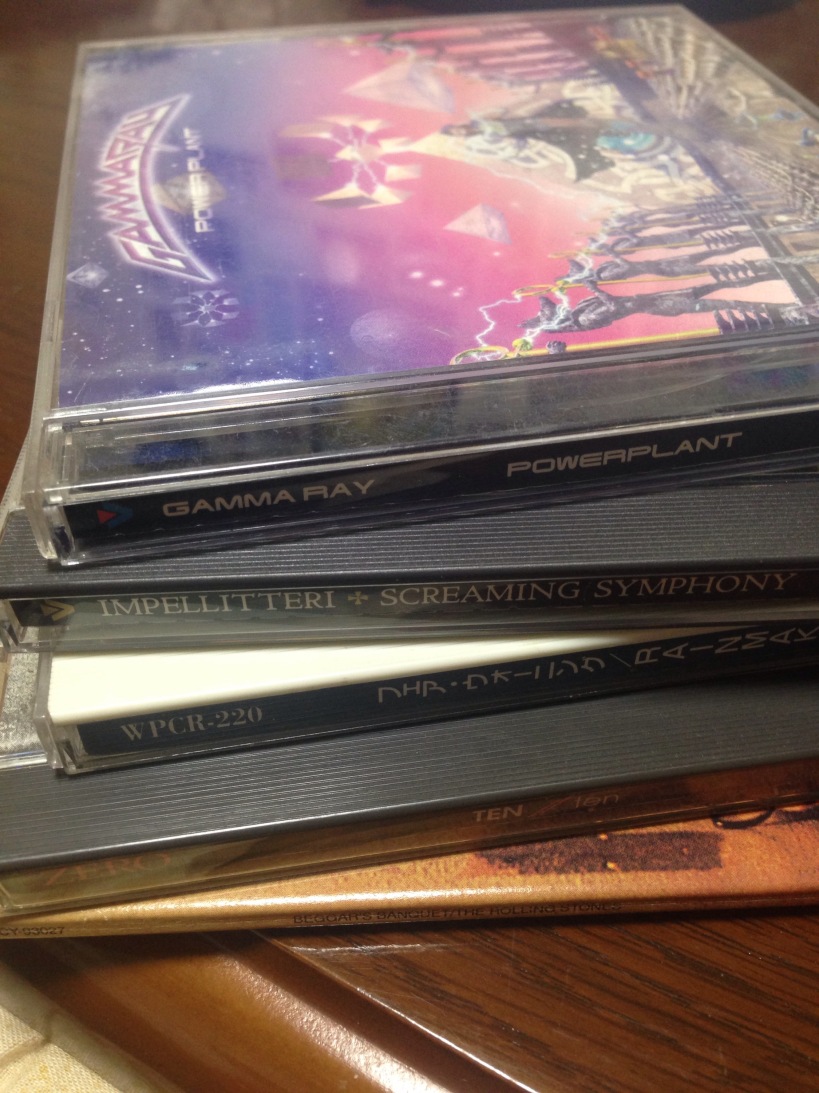 It probably seems like music is the only thing I want to talk about, which is partially true, but I like it as a topic mainly because it helps me get to know people better and use it as a base to move the conversation off into other directions.  But if I come across someone as nerdy about it as I am, we’ll probably never need to.

One thought on “Enkai”