Festival season ended a month ago, but I’m finally getting round to writing this post about the best festival in Japan… Aomori Nebuta!  Recently I read that Aomori is the number one prefecture for festivals in Japan, followed by Kyoto. I haven’t been to any other major festivals in Japan, but I wouldn’t be disappointed if Aomori’s were the only ones I’d get to see.

The word ‘nebuta’ refers to the floats, which are pulled along the streets at night, occasionally being turned around on the spot to show off their beautiful designs.  Legend has it that a shogun in Mutsu province used taiko and flutes to attract the attention of his enemies during a battle, which is one explanation for their accompaniment in the parade, although they’re more likely to have evolved from Shinto ceremonial traditions.  (…I try not to let the truth ruin my beautiful image of Japanese shogun warriors using music to brutally kill each other.)

Depending on which city you go to, the shape and concept of the floats, as well as the festival vibe, are completely different.  There are over 30 villages in the prefecture that hold their own festivals, but the three biggest ones are in Hirosaki, Goshogawara and Aomori City.  In Hirosaki, floats shaped like fans, which depict large (and often gruesome) pictures on the front and an image of a beautiful woman on the back, signify the triumphant return from battle. The slow accompanying music and dancing make it the calmest festival of the three. 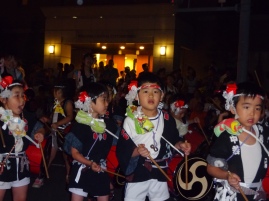 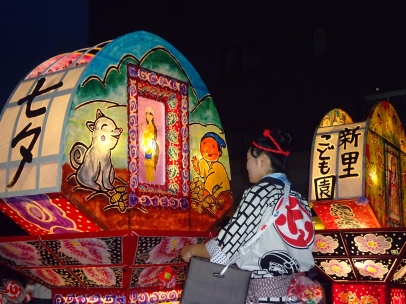 Goshogawara’s ‘Tachineputa’ floats (tachi meaning ‘standing) are an astonishing seven storeys high, displaying designs based on Japanese legends and mythical tales.  Paraders with hand cymbals spur the watching crowds on, by dancing alongside them down the street and chanting“yatte-mare yatte-mare”. Tachineputa is much livelier than Hirosaki Nebuta, and probably my favourite because the floats are seriously cool.  Unfortunately I couldn’t actually take any photos of the festival because I was lucky enough to play taiko in it with a local group of festival musicians!  This was the same festival I went to last year, the second day after I arrived in Aomori as a new JET. The familiar music and smells coming from the food stands took me right back to when everything was new and exciting and I had no idea what I was doing. I remember standing among the crowds of spectators, eating my yakisoba in a happy daze even though I was by myself and couldn’t find any other JETs.

The main event however is Aomori Nebuta itself, held in the middle of the city. In my opinion the floats aren’t as spectacular as in Goshogawara mainly because they’re smaller, but it’s the colourful designs inspired by Kabuki theatre, Japanese and Chinese mythology, and sometimes popular modern characters that steal the show.  Watching people jumping along in the parade is so much fun, and you can join in yourself if you’re wearing the right costume!  (This is to stop naughty people trying to ruin the parade.)  Below is a short video of me and my friend Yukako jumping in the parade.  It was the first time she’d been to the festival in about 15 years, so we were both having an absolute blast.  Definitely rent a costume and give it a go if you ever come up to see it! 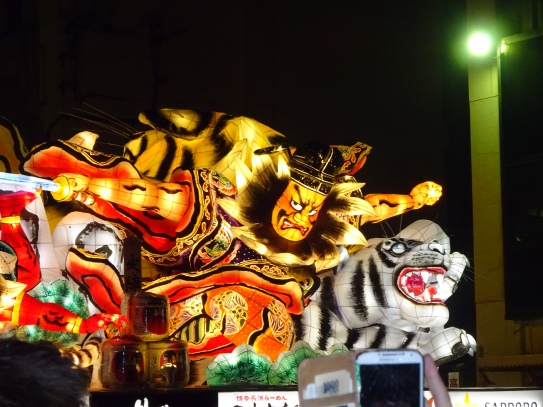 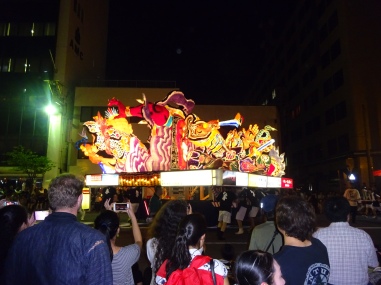 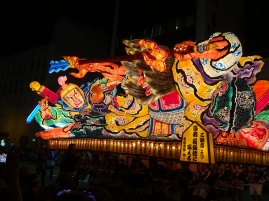 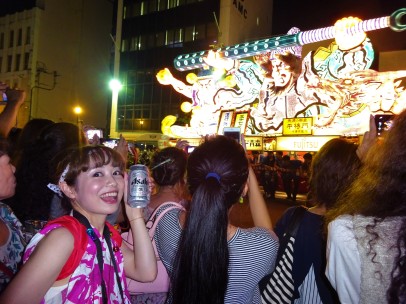