Japan has a generous amount of national holidays, one of which fell on Tuesday this week.  Rather than spend the day travelling back and forth between my sofa and the fridge, I actually did something impressive/physically demanding!  I am fortunate enough to live an hour away from a UNESCO World Heritage Site (one of four natural sites in Japan) called Shirakami-sanchi, which means “white god mountain area”.  It’s a huge mountainous expanse of virgin forests and beech trees, with Shirakami-dake being the highest peak in the area at 1,232 m (4,042 ft).  My neighbour Bridget had already suggested that we climb it at some point, so we decided to go ahead and do it.  She usually does it three or four times a year, but she hadn’t done it for over three years since having her kids.  I didn’t really think much of the climb until she was briefing me the day before on what to bring, what to wear, and to make sure I’d be ready to leave at 6am so that we could be back before nightfall.  I suddenly realised that I would be climbing an actual mountain and not the nice, gentle Surrey hills that I’m used to.

On the way there Bridget explained that if there were no other cars in the car park when we got there, we wouldn’t go ahead with the climb because her husband didn’t want her doing it without anyone else around.  This was because a) there are BEARS roaming around and b) it’s very possible that something could go wrong when climbing a mountain!  I’d be lying if I said I wasn’t secretly hoping that there wouldn’t be any cars when we got there, but alas there were four of ’em.  So we set off, me with my rucksack full of snacks and Bridget looking much more like a pro, with her bear-bell softly ringing and her backpack leaving a smokey trail of incense to keep the mozzies at bay.

From the car park to the hut where you sign in (for obvious safety reasons) there was a very steep hill.  This wasn’t even part of the hike, but we were already breathing pretty heavily before we’d even got to the top of the road.  I could tell we were both silently panicking about being able to last a whole day of climbing. 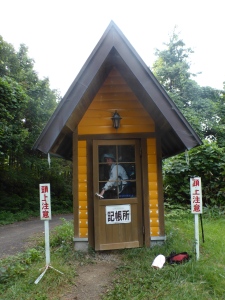 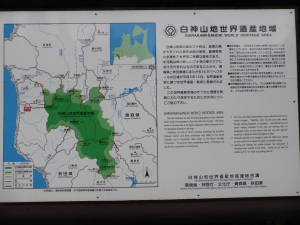 We officially set off into the forest at 7:45, tracing the narrow path that wound along the edge of a sheer drop into the trees below.  An hour into the walk, I realised this mountain was no joke – it was really steep and rocky, and we were constantly having to haul ourselves over giant branches and uprooted tree trunks that lay sprawled over the pathway.  I was immensely grateful for the walking stick Bridget lent me!  When she told me she’d been training for this by walking an hour up the steep hill near our house every morning for two weeks, I suddenly realised why… but I still managed to be fitter than her, hurrah!  Daily yoga practice is paying off.  (It’s surprisingly hard work!)  We were shown up a few times by other hikers though, one of whom was actually RUNNING up the bloody mountain!!  Insanity.  He wasn’t even breaking a sweat.  We saw him on the way down again before we’d even got to the top, and then AGAIN when we were coming back down, he was going back up again!  We stopped to talk to him, and he modestly explained that this was his 2nd time coming down that day and it takes him a mere hour and a half on the way up alone… NORMAL PEOPLE DON’T DO THAT.  The man was a machine with calves of sinewy steel. 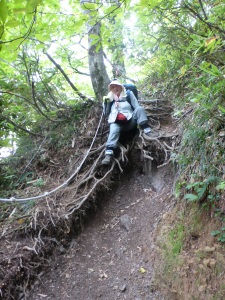 Because I was constantly looking at the ground to watch my footing, it was easy to forget to look up and admire the incredible scenery that surrounded us overhead.  (I think I just devised some kind of metaphor about life?!)  It was definitely worth the risk of falling over to catch glimpses of the distant mountains in between the trees. 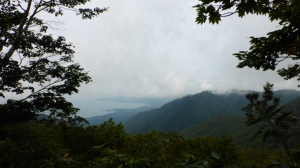 We finally made it to the top four and a half hours later.  The last hour felt like it went on for ages… we kept seeing people on their way back telling us we were nearly there so it was  nice to have some encouragement.  This part was so steep we had to actually use our hands to climb up the path, but I could see the little cabin at the peak of the mountain getting closer and closer.

I thought it was weird that there was so much mist around but then I realised it was the clouds.  It was amazing to see a whole load of them rolling in and obscuring the top of the mountains one minute, and then completely disappearing the next. 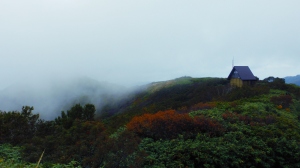 It was such a relief to finally get to the top.  Even though the sky wasn’t very clear, we could see layers and layers of the mountains’ blue silhouettes fading into the distance, and it looked like Autumn had singed the forests with warm shades of red and yellow.  It was at this point Bridget confessed that she had been really close to turning back about an hour into the walk, but we stopped to rest frequently and it actually got easier the more we walked.  And it was all worth it in the end! 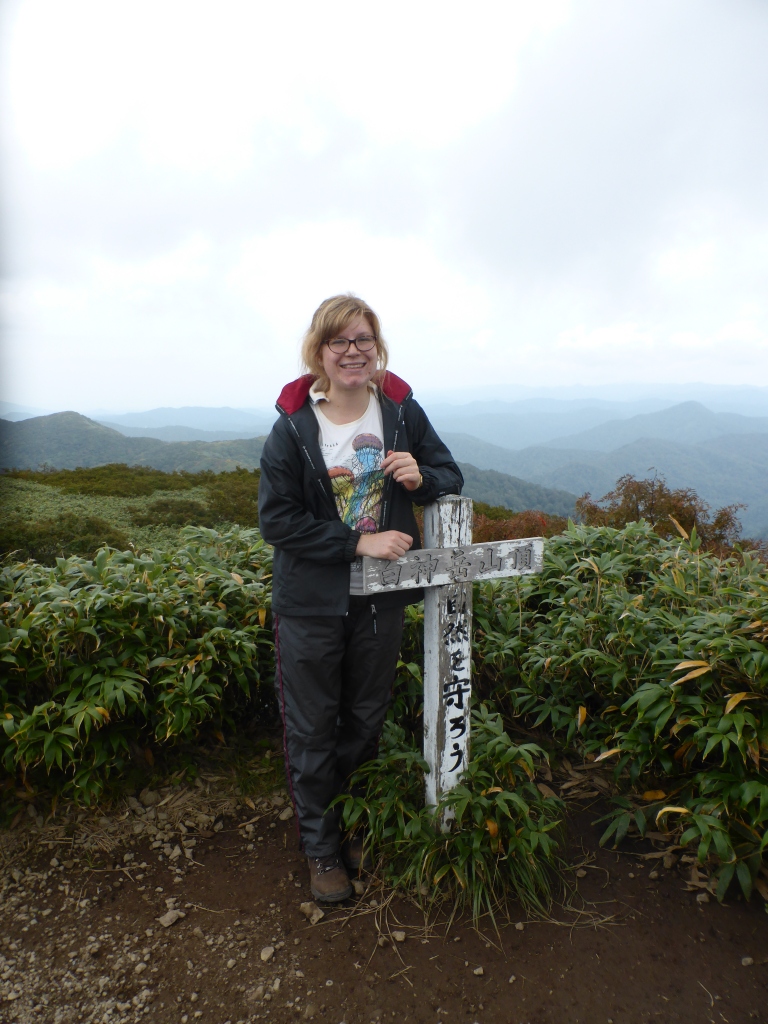 Unfortunately a lot of my photos came out blurry as I tried to use the fancy settings on my camera but ultimately didn’t do a very good job of it!! Got some learning to do.

I actually found the hike on the way down much harder than on the way up – I can climb upwards pretty fast but I really struggled getting down the steep rocky parts and had to go down on me arse a lot of the time!  When we reached the end at 16:00, over 8 hours after we started, I was more than ready for the onsen.  On the way there however, we drove past two of my favourite eikaiwa ladies, and they invited us in for tea!  One of them had a little dog who kept sitting on my foot under the table.  I was so tired though I could barely stay awake talking to them, but we didn’t stay too long thankfully.

The concept of onsens in Japan seems quite strange when it’s considered inappropriate here to wear something that reveals part of your back, but going to communal baths with a bunch of naked strangers is actively encouraged and a perfectly normal thing to do.  I decided that being embarrassed about it would just be pointless, so I just went with it!  There was a big bath in the middle that was about 45 degrees and was apparently good for muscle ache.  It was amaaaazing, even if I had to force myself to stay awake…  I can definitely see why onsens are so popular, and they’ll probably save me from a wintery death when it gets really cold.

The next day I had muscle ache in places that I didn’t even know existed, and I had to walk like John Wayne for the most part.  Maybe if I do it enough times I’ll be like the crazy running man… Not sure I want legs that look like lego bricks though.