Since leaving home over 5 weeks ago I have played the piano once, which was on the grand in the town office’s ceremony hall and it was SICKENINGLY out of tune so it kinda ruined my reunion with Chopin.  There are pianos in all the junior high schools but I can never use them.  Sigh.  Maybe it’s time to invest in a keyboard? I think I’ve forgotten how to play.  I’m also missing proper coffee when I’m at work… They don’t have it with real milk, only that weird white powdery stuff or the tiny milk capsules that are actually 5ml of cream.  WHERE IS THE MILK.  I’m worried that the teachers I brought teabags for have been unwittingly drinking it without milk and are wondering what the fuss is all about.

I am currently waiting for my chocolate banana cookies to cook in my new oven!  I can’t believe how efficient the postal service in Japan is – I ordered the oven off Amazon on Saturday, but got a missed phone call when I was at work on Monday and came home to a missed delivery notice. Booo.  Thought I was going to have to go through the hassle of arranging redelivery, but then the number rang again and I was like oh god how do I speak Japanese on the phone??  Turns out it was the postman and wanted to know if he could bring my package in half an hour!  What service.  Sure enough I heard a car engine outside my door exactly half an hour later and I opened my front door to the happiest postman in Japan.  He handed me my package, we laughed together for a moment, then he tipped his hat and skipped back to the van.  The joys of internet shopping have been taken to a whole new level.

I’ve just taken the cookies out of the oven and they have been a partial success… there’s not very much space so they’ve all kinda squished together.  And the underneath bits aren’t as cooked as the top… I had a vision of Paul Hollywood flipping one upside down, turning to me with his horrible blue eyes and declaring “That’s under-baked”.  I put them back in the other way round so hopefully they’ll be ok!  My apartment now smells like a delicious warm banana.

Just tried one of the rejects as I’m bringing the good ones into the office tomorrow in an attempt to get the other workers to like me more. I realised no one enjoys having a newbie around and I always like people more if they give me food, so maybe it’ll break the ice a bit better.  Anyway the reject cookie was delicious, even if they are a bit of a splodge shape.  I will tell them it is the true British way.

Mid-sample. Despite my face I am actually enjoying the cookie. UMAI!

Last night I went to help Bridget with another English conversation club (eikaiwa), this time in Iwasaki which is about an hour away.  When we got out of the car two of the ladies were just going in, but they stopped when they saw me, linked arms with each other and edged towards me (it was dark) saying “Are? Eh!! Are?” (pronounced like ah-reh, kind of means “huh, what’s this?”) and giggling.  I introduced myself and instantly knew they would be my favourite eikaiwa ladies.  The lesson was very amusing and they asked me lots of funny questions, but the highlight was when they tried to spell my name and one of them ended up with this: 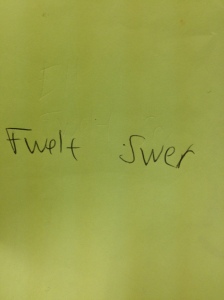 Went to a nomikaiwa in Hachinohe at the weekend, where we had to speak for one hour in English and then one hour in Japanese, but it was SO LOUD it was impossible to hear anybody.  Thank god there was free pizza.  It did take us about 4 hours to get there (we got slightly lost) so probably won’t do it very often!  Had fun though.  It’s a national holiday on Monday so yay for three-day weekends!  There’s a festival on in Hirosaki which I’m gonna go to and then probably do some hiking on Monday.  Aaaand now I need to clean up the pile of bowls in my kitchen sink and get rid of the floury mess on the counter.  But a yoga session is waiting for me afterwards 🙂  Nighty night!